The S&P 500 reached a record high last week aided by a sharp decrease in longer-term bond yields. Specifically, growth stocks outperformed by reducing the implied discount rate on future earnings. The rally in growth stocks led to the tech-heavy NASDAQ Composite marking its fourth weekly gain in a row. Conversely, financial stocks suffered as the decrease in yields weighed on bank lending margins.

Investors were mainly focused on inflation and interest rates last week. The yield on the 10-year Treasury fell throughout the week. Yields were seemingly lower due to Federal Reserve policymakers stating they would keep monetary policy highly accommodative. They also reiterated that recent spikes in inflation would be temporary.

Yields briefly jumped on Thursday after the Labor Department reported that core consumer prices rose 0.7% in May, above expectations above 0.4%. Also on Thursday, it was reported that the Senate reached a deal in which the proposed infrastructure plan would not raise corporate taxes. In addition, the plan would include $762 billion in new spending, far below the initial proposal of $2 trillion. Although Republican congressional leaders are in favor of the new proposal, it is not yet clear if the President and other Democratic leaders would back the new plan.

U.S. Treasuries rallied throughout most of the week as the yield on the 10-year note fell to its lowest level in nearly three months. Municipal bonds outperformed as the asset class recorded the 14th consecutive week of positive inflows. Investment-grade corporate bonds also performed well, with a heavy supply of new issuance being met with strong demand. The high yield bond market was somewhat subdued last week as investors weighed inflation versus growth and the new infrastructure proposal. 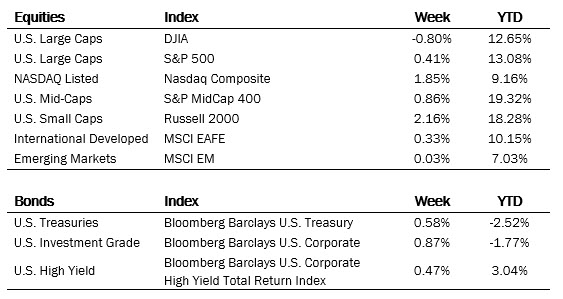 This material has been prepared by Investment Consulting Services and is not to be relied on as a forecast, research, or investment advice.  The material is intended for informational purposes only.  The opinions expressed are as of June 15, 2021 and are not guaranteed to be accurate.  No warranty of accuracy or reliability is given and no responsibility for errors and omissions is accepted by Investment Consulting Services, LLC., its officers, or its employees.  Data has been obtained from sources considered to be reliable, but its accuracy and completeness cannot be assured and is subject to change without notice.  Past performance is not a guarantee of future results.